How do Wind Turbines Work?

With over 58,000 wind turbines in the United States, chances are you’ve driven past a wind farm at some point; but have you ever wondered exactly how wind power works? 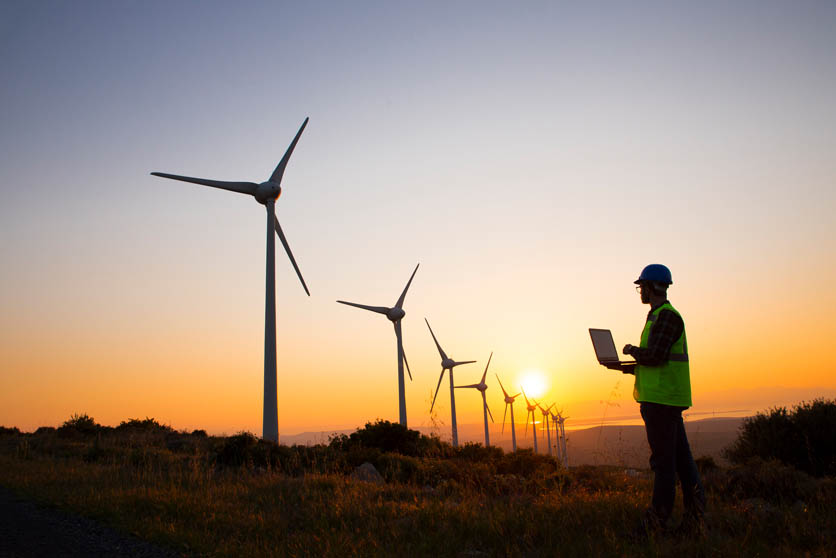 In the last decade, wind power generation has more than tripled in the United States, making it the largest source of renewable energy in the country – and with good reason. Wind power doesn’t create any harmful emissions that can contribute to global climate change, and wind is truly an inexhaustible natural resource. Thanks to improvements in technology, wind power costs per kilowatt hour (kWh) are less expensive than fossil fuels in places with the proper resources and regulatory environment. So how do those turbines actually turn wind into the electricity we use in our homes and businesses every day?

The Science of Wind Power

Before we talk about how wind energy works, it’s important to understand how wind itself works. Technically speaking, wind is a form of solar energy that’s caused by the sun unevenly heating the atmosphere, along with the earth’s irregular surface and rotation. Changes in temperature and pressure cause air to move around the surface of the earth, creating wind patterns that vary depending on geographic location, terrain, bodies of water, and more.

By harnessing that air movement to power wind turbines, we can generate the electricity we use everyday. Here’s how it works:

Land-Based The most common type of wind power generation uses land-based turbines that—depending on capacity and wind speed—can each generate up to several megawatts of electricity per year. That’s enough to power about 1,500 average households. These larger turbines are more cost effective and are typically grouped together into wind farms that can sell power in bulk to the electric grid.

Distributed Wind turbines can also be installed for individual customers, but they must be at or near the location where the power they produce will be used. This “distributed” wind power typically uses much smaller turbines, and they’re more common in “off-grid” locations where other forms of electricity aren’t available.

Off-shore Turbines can be built offshore on massive floating equipment to take advantage of powerful ocean winds, with electricity flowing through underwater cables. These turbines are much larger than land-based turbines and therefore come with more upfront costs. However, they’re capable of producing vast amounts of energy; in 2019 GE introduced its off-shore Haliade-X 12 MW turbine, which can power up to 16,000 homes with a single turbine. Currently, the UK leads the world in offshore wind capacity, followed by Germany and China. While the US only has one off-shore wind farm in Rhode Island, several are being planned off the coasts of northeastern states, and further expansion is predicted as costs for these projects go down over time.

All of these options sound great, but what about areas where winds aren’t strong enough or reliable enough to generate consistent power? That’s where the renewable energy credit (REC) system comes into play. Some states generate mass quantities of wind energy - namely Texas, Iowa, North Dakota, Oklahoma, and other states with large open spaces that are well-suited for wind power. Typically, wind farms are located in very rural areas where electricity generation exceeds what’s being used by the local population. In addition, the infrastructure required for wind power makes it cost prohibitive for most individual households and businesses to have their own turbine.

When electricity is sent to the grid from a wind farm, it’s combined with electricity from many other sources. There’s no way to physically track individual electrons, but the REC system was created to keep track of where units of energy were sourced. A REC is produced when a renewable energy source generates one MWh of electricity and sends it to the grid. All RECs are uniquely numbered and generally include information such as where they were generated, the type of renewable resource they came from, and a date stamp of generation. Once they’ve been sold, they cannot be purchased again. The exchange of RECs is tracked and recorded, which allows municipalities, utility companies, and even individual companies to purchase megawatt-hours (MWh) of renewable energy from the sources producing them.

For example, GoMacro utilizes wind power from a wind farm located in Rugby, ND using renewable energy credits (RECs). When a turbine at that wind farm produces 5 MWh of electricity, they have 5 RECs they can sell to utility companies. Our local utility company, UMMEG, purchases those RECs on our behalf so that we can say 5 MWh of our electricity use came from wind power. The purchase of these RECs not only displaces the use of non-renewable power sources but also supports overall demand for renewable energy.

If you’re interested in utilizing wind power, check out this resource to see if your location is a suitable fit for a Small Wind Electric System or reach out to your local utility to inquire about purchasing wind RECs.

Learn more about our journey to wind power.