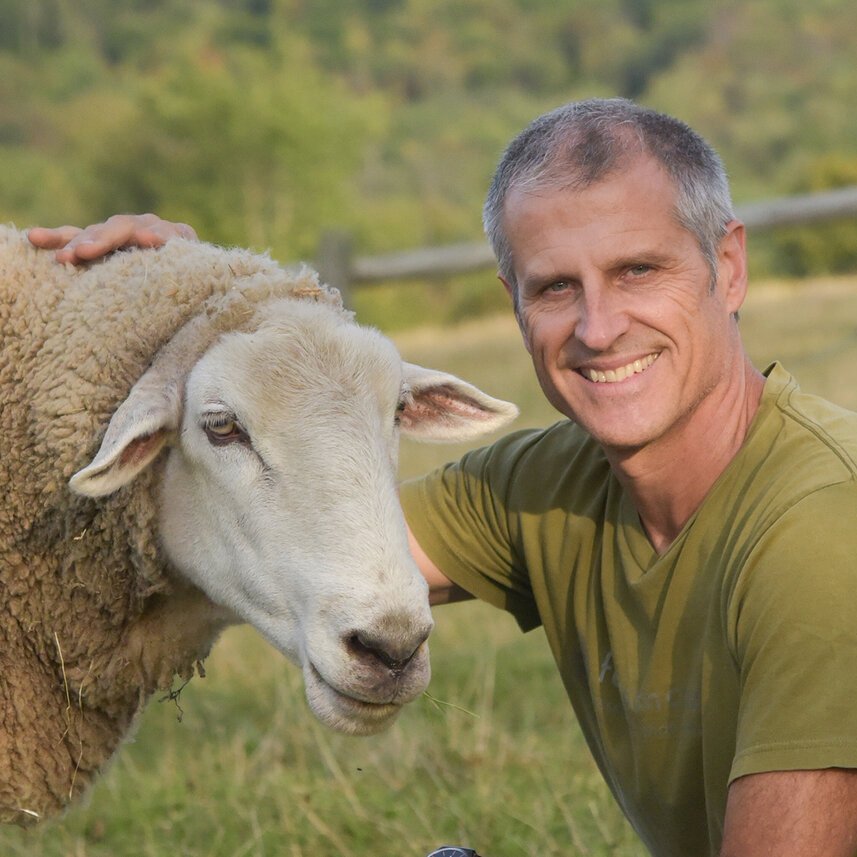 Hailed as “the conscience of the food movement,” Gene Baur has spent more than 25 years travelling extensively around the country to raise awareness about industrialized factory farming, our current food system, and the benefits of living a plant-based lifestyle.

Gene is also the co-founder and president of Farm Sanctuary, an organization whose cause is closely aligned with our values. Farm Sanctuary promotes a compassionate, vegan lifestyle, brings awareness about the abuse factory farm animals suffer, and works to combat these through rescue, education and advocacy efforts. We had a chance to chat with Gene about the effects of factory farming, the progress that’s been made, and how we can all work towards a more compassionate food system.

I grew up near Griffith Park in the Hollywood Hills, and was drawn to animals and nature. I was viscerally bothered to see them harmed by narrow-minded human activities, such as when old trees were destroyed so houses could be made larger. I didn’t want to be a cog in a wheel of a system that was causing such destruction. During high school and college, I learned about the cruel treatment of animals on factory farms, along with the inefficiency of animal agriculture, and I came to see this industry as one of the greatest affronts to animals, the earth, and ourselves. I went vegan in 1985, and I co-founded Farm Sanctuary in 1986 to combat factory farming, which most consumers were unwittingly supporting despite the harm it causes to themselves and others.

One of Farm Sanctuary’s most important values is to respect and welcome people wherever they are on their own journeys, as well as to encourage and support incremental steps toward living more kindly. Instead of judging people with different opinions, we try to understand their experiences, while also looking for common ground to build on. In my first book, I mentioned the idea of “loving the sinner, hating the sin”⁠—which is at the heart of this approach⁠—along with having humility and knowing that we all make mistakes, even the most vegan vegan.

I wish more people would recognize the profound deleterious impacts of factory farming, including to their own wellbeing, and understand that we can each make daily choices that are healthy, empowering, and aligned with our own values and interests. I think most people want to be humane and would rather not support the cruelty of factory farming; and that they’d rather eat food that is nourishing, instead of food that makes us sick; and would rather support a sustainable agriculture system, instead of one that is harming animals, ecosystems, and the planet.

In the 1980s, there was very little awareness about the myriad harms of factory farming and practically no legal limits on intolerable farm animal abuse. Today, several states have outlawed some of the industry’s cruelest practices, and mainstream businesses are pushing for reforms amid increased societal awareness of the problems with animal agriculture. Ultimately, besides preventing exploitive and inhumane agricultural practices, it’s important to create sustainable plant-based solutions, and there has been significant movement in this arena. Innovative companies are producing a wide variety of vegan alternatives to animal products. The government⁠—which spends billions of dollars on agricultural programs every year⁠—should do more to incentivize and support them, as well as to support farmers markets, urban gardens, and other entities involved in community-oriented, plant-based agriculture.

I think most significant “wins” occur over time, sometimes taking decades, and usually in collaboration with allies. That was the case with a recent court ruling against the North American Meat Institute who was challenging an important California law that restricts factory farming abuses. I hope this court victory, which was passed through a voter initiative campaign in 2018, stands and leads to additional protections for animals who have been treated like unfeeling commodities instead of as living, feeling animals for many years. Other significant wins over the past year involve the growing awareness about the environmental implications of animal agriculture, including how it increases the risk of pandemics and climate crisis, as well as increased access to vegan food—including at mainstream supermarkets and even fast food establishments.

For those who feel intimidated by adopting a vegan lifestyle, I’d encourage small incremental changes that fit into existing habits. Many meals that someone might eat regularly could easily be veganized. Instead of using cows’ milk on cereal, for example, it’s easy to use plant-based milk, and there are many options to choose from. There are also many vegan products available that can be used in place of meat, whether it be ground beef, chicken nuggets, or fish sticks. Ultimately though, most of us would benefit by eating more whole plant foods, so I’d encourage folks to add fruits, vegetables, and legumes in ways that are convenient and fit their lifestyle. Having an apple for a snack, for example, is an easy way to eat vegan.

In addition to eating vegan, people can also help educate their families, friends and others, and empower them to eat more plants. An effective way to encourage dietary shifts is by sharing vegan dishes at social gatherings, and demonstrating that vegan food is tasty and satisfying. Many people may want to eat healthier while supporting a better food system, but they aren’t sure how, so providing advice and tools that enable a shift⁠—including recipes⁠—is key. There is also a wide variety of excellent information online, including documentaries, cooking classes, and recipes that people can share to help educate, inspire, and empower others.

If you’re interested in learning more about emergency rescues, advocacy efforts, and ways to take action to help animals, be sure to sign up for Farm Sanctuary’s newsletter and get connected with a community that cares about animals.

Another way to support the work of Farm Sanctuary: stock up on Protein Replenishment MacroBars! During the month of May, a percentage of net proceeds from this MacroBar go to Farm Sanctuary.