If a hummingbird were the size of an average human being, they would need to drink more than one can of soda every minute to get enough simple sugars to support their high-energy lifestyle. Can you imagine drinking a soda a minute to get through your day?

Hummingbirds need large amounts of simple sugars to get through their day, but humans don't. Simple sugars and processed sugars, like glucose, are absorbed through the stomach lining directly into the bloodstream. The pancreas senses the presence of sugar and releases insulin, which opens the doors of the cells, allowing the glucose to enter and be transformed into energy. This is all good for the hummingbirds, but the problem with this for humans is that it leads to an immediate spike in energy. If humans were more like hummingbirds and we could flap our arms 50 times a second, we’d be able to use all this influx of energy. But since we can’t use it all, insulin helps to convert it into packages of glucose, called glycogen, which are stored in the liver and muscles to supply future energy needs. Glycogen is great stuff for athletes, because it provides almost a day’s worth of available calories for running a marathon or other similarly intense exercise. But that’s the limit on how much glycogen your body can store. If there’s still more glucose in the bloodstream, let’s say you just drank a soda, then the liver will transform the excess into body fat. And, as we all know, this isn’t so great.

Hummingbirds evolved to utilize a diet rich in simple sugars whereas humans evolved to eat a more complex diet. GoMacro uses the more complex, unprocessed brown rice syrup as a sweetener in our energy bars. Because the vitamins and minerals haven’t been stripped away from the brown rice syrup, the stomach has to slow down and go through the full digestion process to transform it into a simple sugar before it can be released into the bloodstream. On top of that, we’ve added protein and fiber content to our MacroBars, which slows down the digestion process even more. As you digest your protein bar, the sugars are released slowly into the bloodstream and you receive time-released energy. Instead of a big spike of energy all at once, followed by depletion, (which makes you want to eat again) the satiated feeling and energy you get from a MacroBar can last several hours. There's no extra glucose being transformed into fat —hooray! Now you can expend the energy over time and you're avoiding the constant spikes in insulin, which are the main cause of Type II Diabetes. 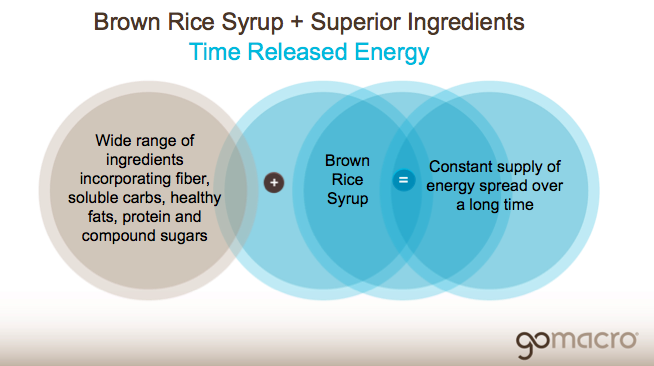 The best part is that you can indulge your sweet tooth without feeling guilty. Go ahead and enjoy a Peanut Butter Chocolate Chip MacroBar. It tastes great and is chock full of vitamins and minerals and everything good for you. Just remember that even MacroBars ought to be eaten in moderation.

GoMacro is powered by 100% renewable energy.